The COMPLETE Cannabinoid Strength List. What cannabinoid is the MOST POTENT? , Is THC-P, HHC-P, or THC-H, is the STRONGEST? 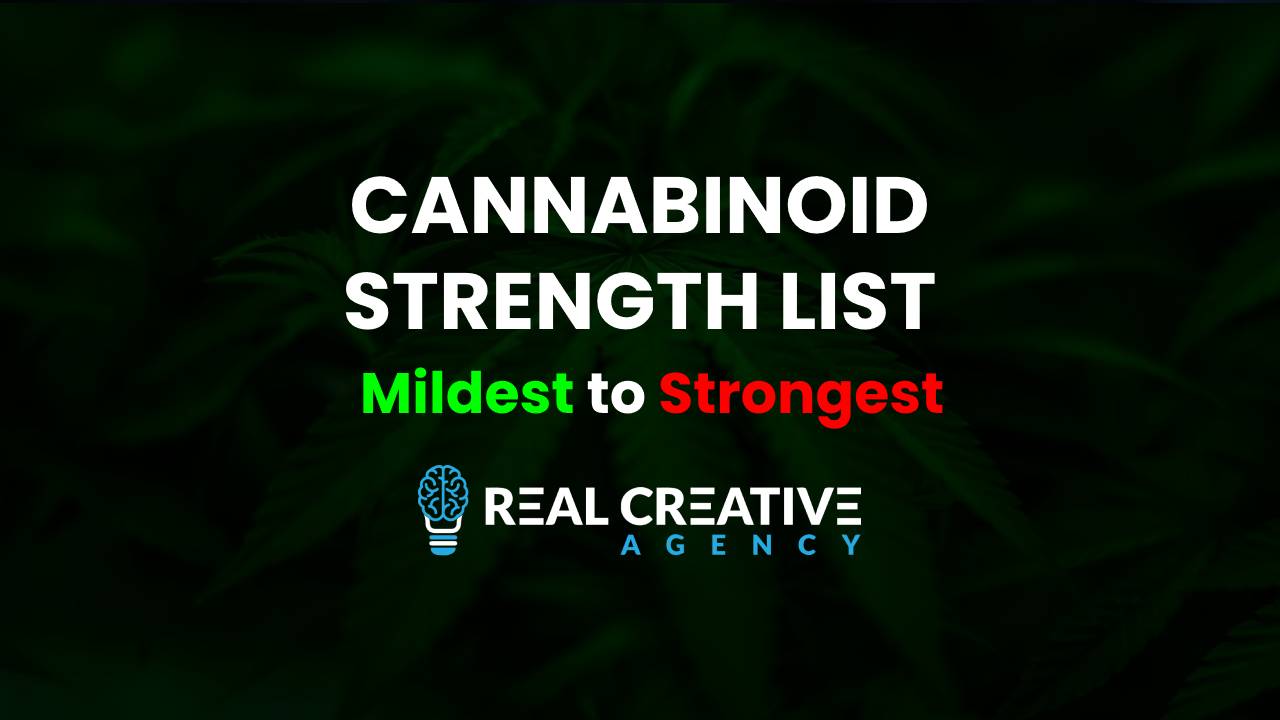 List Of Cannabinoid Strengths- Least Potent to MOST Potent

Cannabinoids are several structural classes of compounds found in the cannabis plant.

The most notable cannabinoid is phytocannabinoid tetrahydrocannabinol THC, or Delta 9- THC.

THC is the main intoxicating compound in cannabis that gets you high.

When the Farm Bill was passed in 2018, it made hemp legal at the Federal Level. That opened up the door to discovering new cannabinoids, much stronger than marijuana…that are LEGAL in almost every state.

Some of these cannabinoids, like THC-P, is considered 33 times stronger than THC.  HHC-P and THC-H are also considered pretty potent as well.

Here is the list of cannabinoids that shows their strength or potency, their scientific name, and their known effects.

Please kind in mind that each person has a different reaction to cannabinoids. The strength and effect are based on various inputs.

This is NOT an exact science and should not be referenced as such. 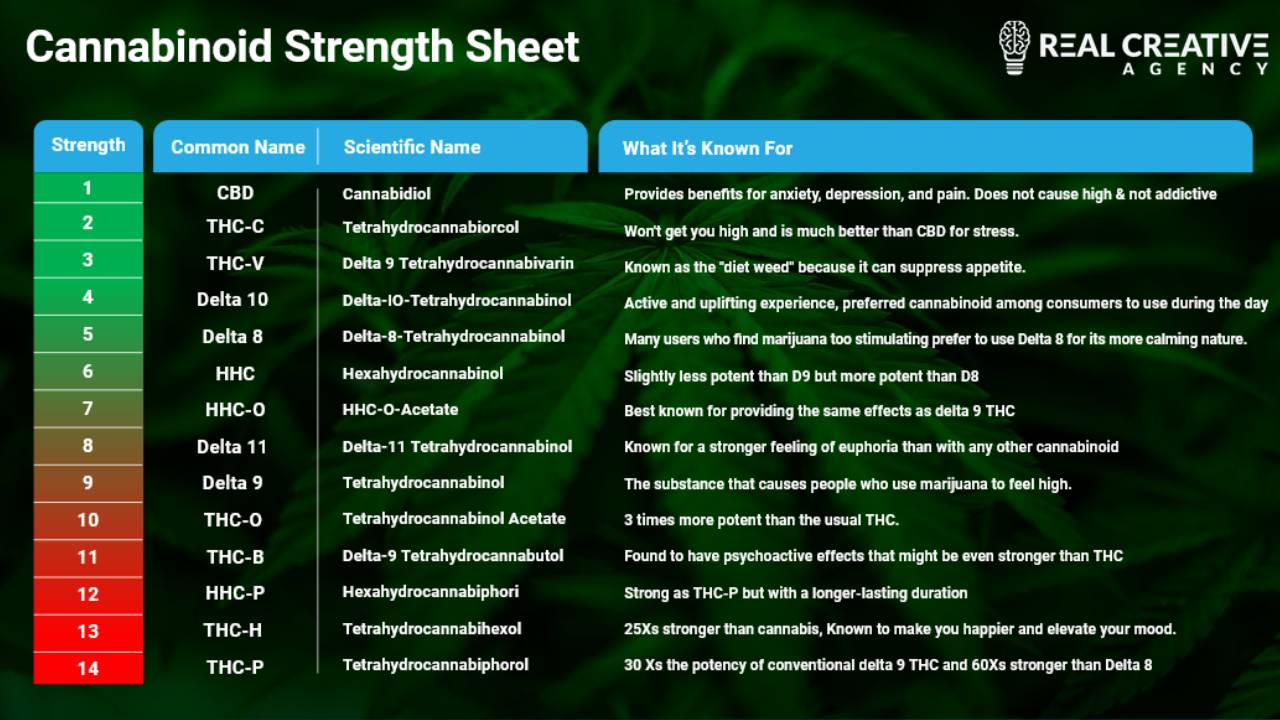 CBD is the cannabinoid that dominates hemp’s chemical composition.

It is NON intoxicating but its relieving properties can be quite effective.

It is used for anxiety, depression, and pain.

It DOES NOT cause a high, and it is NOT addictive.

THC-C is much better compared to CBD, because while it won’t get you high, it can cause a feeling of deep internal bliss that helps you get rid of stress.

Some say that the effects are stronger than CBD.

This one is totally new, so research is limited.

The best selection of THC-C products.

Also known as the “diet weed” because it helps those looking to reduce appetite and encourage weight loss.

Some call it the “race car” cannabinoid because it comes and goes quickly.

About 25 percent as strong as THC and about half as potent as Delta 8.

Delta 10 THC has been found to be LESS POTENT than Delta 8 THC while still providing the psychoactive component of THC.

It seems to create a more active and uplifting experience, making it a preferred cannabinoid to use during the day.

Once hemp became legal at the Federal Level, and THC could be extracted, Delta 8, or “D8” was the most popular product to get high legally.

Many users who find marijuana too stimulating prefer to use Delta 8 for its more calming nature.

It doesn’t carry the negative side effects of THC like anxiety, paranoia, or rapid heartbeat.

The largest selection of Delta 8 products.

If we compare the effects of HHC, it would be somewhere between Delta 8 THC and Delta 9 THC.

It has one significant legal advantage over Delta 8 and Delta 10; it isn’t called THC.

It is close to 1.5Xs more potent than regular HHC.

HHC-O is best known for providing the same effects as Delta 9 THC.

Research shows you’re more likely to have an Indica heavy type of experience. The Indica strain is known for its sedative-like properties.

Here is a complete line of HHC-O products.

A naturally occurring and legitimate cannabinoid found in hemp, rather than a synthetic cannabinoid.

A Delta 11 high is all about euphoria.

Known for a stronger feeling of euphoria than with any other cannabinoid.

A common mistake is confusing Delta 11 THC with 11-hydroxy THC.

Delta 9 is arguably the most famous cannabinoid of all time.

This compound has been getting people high for centuries.

Most people refer Delta 9 as THC.

The largest selection of Delta 9 products.

Rumored that THC-O is roughly 3Xs more potent than THC.

It offers a more potent high, and users report it as being an introspective, almost spiritual experience.

Known for these effects:

Behaves similarly to THC, with a potential for pain-relieving and anti-inflammatory properties.

Users find it to be an excellent sleeping aid.

Found to have psychoactive effects that might be even stronger than THC.

A full selection of THC-B products.

HHC-P is as strong as powerful THC-P but with a longer-lasting duration.

Unlike THC and CBD, which can be extracted from hemp, HHC-P is synthetic.

This potent cannabinoid is known to be uplifting, euphoric and relaxing.

The 2nd most powerful hemp-derived cannabinoid on the market today.

Researchers discovered that THC-H, much like THC-P, is a naturally occurring cannabinoid found in hemp.

The best THC-H products on the market.

Recently found cannabinoid at very low levels in some strains of marijuana and can be produced by altering legal hemp-derived CBD.

Research shows it may be 33X stronger than THC.

Can you handle its potency?

What is the BEST LEGAL Alternative to Marijuana?

The Farm Bill of 2018 made hemp legal at the Federal Level.

This allowed scientists and entrepreneurs to determine ALL of the cannabinoids in hemp.

Some of these cannabinoids, like THC-H and THC-P, are MUCH stronger than Delta 9 THC…and LEGAL!

Here is the BEST legal alternative to marijuana.

Keywords play a key role with your ability to get found in YouTube search results. Here is a FREE WAY to find the best keywords.

Linktree is a great landing page builder but Link Genie is the best alternative to Linktree. We are going to show you why…

How To Promote Your OnlyFans For FREE

Do you want to promote your OnlyFans page for FREE? Here is an EASY WAY to get more traffic without paying for promotion.

What Is Opt In Email Marketing

Opt in email marketing is a way to continue the dialogue with website visitors. They will share their email if you do it right.

When you optimize your channel and videos for YouTube, there is a better chance your videos will get found on the first page of YouTube.

How To Get More Organic Blog Traffic

To get more organic blog traffic to your blog it needs to be formatted correctly and how you post your content is key.

How To Promote OnlyFans On YouTube Without A Channel

Want to promote your OnlyFans page on YouTube but don’t have a YouTube channel? This is the EASIEST way to do it.

The BEST And EASIEST Day Trading Program For Beginners

Are you new to day trading or not having much success? This is the BEST and EASIEST day trading program for beginners.